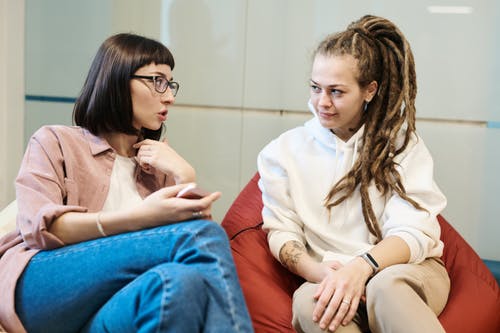 Listening without interrupting is underrated.

As you know I have been re-reading Dale Carnegie’s book on How to Win Friends and Influence People. I am sharing with you today the fourth principle of his section on Six ways to Make People Like You. Becoming a good conversationalist is all about listening. I wouldn’t say that listening is a lost art. By reading history, I would say that people have never been very good at it. When people feel listened to they feel understood. When people feel understood they feel respected and valued.

One morning years ago, an angry customer stormed into the office of Julian F. Detmer, founder of the Detmer Woolen Company.                   “This man owed us a small sum of money,” Mr Detmer explained to me. “The customer denied it, but we knew he was wrong.  So our credit department had insisted that he pay.  After getting a number of letters from our credit department, he packed his grip, made a trip to Chicago, and hurried into my office to inform me not only that he was not going to pay that bill, but that he was never going to buy another dollar’s worth of goods from the Detmer Woolen Company. I listened patiently to all he had to say.  I was tempted to interrupt, but I realized that would be bad policy.  So I let him talk himself out.  When he finally simmered down and got in a receptive mood, I said quietly:  I want to thank you for coming to Chicago to tell me about this.  You have done me a great favor, for if our credit department has annoyed you, it may annoy other good customers, and that would be just too bad.  Believe me, I am far more eager to hear this than you are to tell it.”

WHEN PEOPLE FEEL LISTENED TO …..THEY FEEL UNDERSTOOD

“That was the last thing in the world he expected me to say. I think he was a trifle disappointed, because he had come to Chicago to tell me a thing or two, but here I was thanking him instead…..I assured him we would wipe the charge off the books and forget it, because he was a very careful man with only one account to look after, while our clerks had to look after thousands.  Therefore, he was less likely to be wrong than we were.

I told him that I understood exactly how he felt and that, if I were in his shoes, I should undoubtedly feel precisely as he did.  Since he wasn’t going to buy from us anymore, I recommended some other woolen houses. He accepted (to have lunch with me) reluctantly, but when we came back to the office he placed a larger order than ever before. He returned home….looked over his bills, found one that had been mislaid, and sent us a check with his apologies.”

There are two kinds of bad conversationalists. Mr. Carnegie reacts to the first kind.

1. The person who brings everything of the other person’s conversation back to themselves.

If you want to know how to make people shun you and laugh at you behind your back and even despise you, here is the recipe: Never listen to anyone for long.  Talk incessantly about yourself.  If you have an idea while the other person is talking, don’t wait for him or her to finish: bust right in and interrupt in the middle of a sentence.–Dale Carnegie

2. The “Shy” person who is afraid of their own voice.   This person may respond with,  “Because I am shy I am a good listener because I don’t say much.”  I  challenge this statement. Someone extremely shy will not ask open- ended questions or engage in reflective listening because they don’t want to make a mistake or draw attention to themselves. They are too aware of themselves and are self-centered.  This often makes others uncomfortable and therefore want  to find someone else at the networking social or dinner party. Instead, you want to encourage people to talk, and talk at the deepest level they feel comfortable.

Some time ago I met a person at a coffee shop.We started out comparing notes about our latest travels. I encouraged him to talk about himself by listening, repeating little phrases that he said, (reflective listening) and asking him open- ended questions. Eventually he began talking about family and his recently deceased parent. I made an affirmation and this brought tears to his eyes, After our time he made mention to someone that it was the most meaningful coffee time with anyone that he had ever had. Did I set out to MAKE HIM LIKE ME? No not at all. I just set out to listen deeply and I made an impact no advertisement for my business could have touched.

Remember that the people you are talking to are a hundred times more interested in themselves and their wants and problems than they are in you and your problems.

Principle 4:   Be a good listener.  Encourage others to talk about themselves.

I look forward to sharing Mr. Carnegie’s  other 2 Principles in the next 2 weeks.